Same with 1v1 games. I don't know how this game did it, but they actually make turn-based, pixelated 1v1 card games look good. So there you go.I actually got into this game because a friend of mine showed it to me and I wanted to pwn his ass at a game, and I don't know how but I really ended up liking it. So I want y'all to like it, too, so I can pwn other people's asses.So a little info: the game has six factions, plus a neutral faction which can be used by everyone.- Lyonar: low in numbers, but tough-as-nails, hardcore.

Focus is on building a supersolid team and keeping it alive. They have some of the most cost-efficient units (they have a ton of health) and have really good spells meant for keeping everyone safe.- Magmar: Big, slow, powerful. 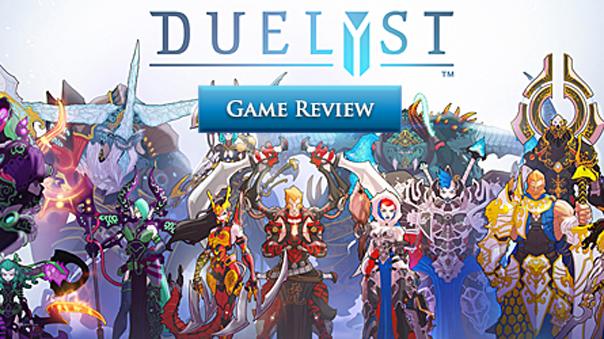 Imagine the Deep Devils from KR, except really good at killing barracks. They're a mixture of high damage and high health. They don't have much in terms of mobility and will probably get hit a lot, but that doesn't matter much when A) you can take anything thrown at you, and B) you can throw it back harder.- Abyssian: The spam faction. Their troops are some of the weakest in the game, but don't doubt them: they can keep summong minions for a really long time, and they have a ton of great spells that allow them to take on anyone. That's assuming they even decide to fight you head-on, since they're usually pretty sketchy and wouldn't attack you unless they knew you they would win.- Songhai: Think: assassin + mage. That's Songhai.

Their troops are usually weak and fragile, and they don't have the numbers to make up for it, but what they lack in strength, they make up for in tactics. Their spells are cheap and powerful at the same time. They're not gonna fight you head-on, like Abyssian, and will probably just shower you with assassins and archers.

They're the only faction in the game that has units completely dedicated to ranged attacks and assassinations.- Vanar: all about that checkmate. The Vanar are a little harder to use-they're recommended for advanced players-because they require you know enough about the other factions.

They excel in controlling the battlefield and forcing you into where they want you to be, and they have great stuff to counter each faction.- Vetruvian: lots of weak, spammable units who are also really good at forcing you into where the enemy wants you to be. Like a mixture of Abyssian and Vanar, except harder. They rely a lot on positioning and have excellent pay-offs, but one wrong move on your side, or one smart move on the enemy's, and your entire strategy might fall apart.Left to right: Lyonar, Songhai, Vetruvian, Abyssian, Magmar, Vanar.Pros to this game:- Fun for both the planners and the spontaneous adapters. You can pull off very satisfying strategies. It's really fun to see your plans unravel the way you want them, and you can win entire games with well-thought out moves. But if you're not a hefty planner, then you can do well with the fact that this game also gives way for quick-thinking, adapting your strategy as the game goes on.- Free kickstarter game. Yeah, it's a kickstarter game, and it's free.

Really easy to install and really easy to pick up, so not much reason not to try it unless your schedule is packed.- Never lags. For a multiplayer game, you never really have trouble with lag.Cons:- Luck. You're allowed to choose the cards you bring into each match, but otherwise there's still a lot of luck involved in this game.

Sometimes you win because you somehow drew a really good card, other times you'll lose because you kept drawing bad ones.- Hard to get new cards. There are daily challenges and you can earn 50 gold a day from them, but five new cards costs 100 gold. That means you'll get 5 new cards every two days. But since the game has over 300 and you can have up to three copies of a single card, well. I'll let you do the math.If you guys are interested (and I hope you are), just check it out.

I hope you'll like it, and I hope you like it enough to decide to play with me, 'cause I would really enjoy playing this with y'all ^-^.