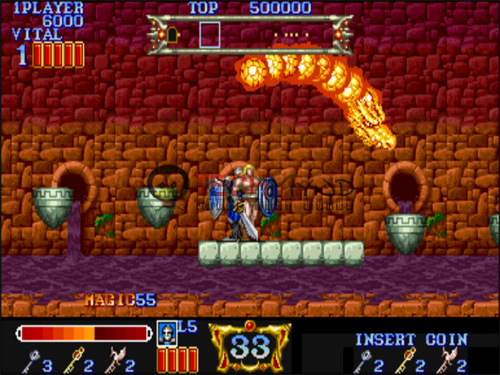 SFC CoverDue to the popularity of RPGs like Dragon Quest, a number of Japanese arcade games experimented with melding role-playing elements with action games. Capcom’s initial attempt at this was 1987’s Black Tiger, which was followed up three years later by Magic Sword. This game isn’t really a sequel so much as an evolution on its concepts, which replaced Black Tiger‘s exploratory platforming for more straightforward hack-and-slashery, while also rethinking what numbers and statistics mean when applied to a fast paced action arcade game. The result is one of Capcom’s best titles of the early 90s, even though it’s largely overshadowed by its bigger name franchises.In Magic Sword, you control one of two buff heroes – not given any proper names in English but named Alan and Belger (no relation to the Final Fight boss, probably) according to assorted Japanese supplementary material – to destroy the evil lord Drokmar. He makes his home on the top of a massive 50-floor tower, drawing his power from a magical artifact called the Black Orb.

To reach him, you need to scale the tower floor-by-floor, occasionally stopping for a boss battle. ArcadeThere are two action buttons, to attack and jump.

A strength meter builds up automatically after every attack, so if you wait a second or two between slashes, then you’ll throw with a more powerful projectile. After beating a boss, you’ll be rewarded with a new, more powerful weapon (swords for Alan, axes for Belger). When you take a big hit, you’ll drop it and need to pick it back up again.

If you leave the level without retrieving it, it’s lost, and you’ll be in a weakened state until you beat the next boss, but it’s typically trivial to retrieve it. Perhaps to mimic the effects of hunger, as with some RPGs of 80s, you lose health automatically, though the rate depends on what difficulty the game is set at.

As a result, you need to keep driving forward and grab restorative food items. If you get high scores, then fairies will come out and reward you with extra health as well. Hitting both buttons at the same time will summon a lightning crash called “Zenidyne” to damage everything on the screen, at the expense of some health.Considering the entire game takes place in one very large tower, there’s actually a reasonably amount of environments, ranging to rooms filled with flames to areas flooded with water. Enemies include the standard fantasy RPG foes like orcs, wraiths and dragons, though other enemies include gigantic bears, mummies, and the occasional Moai statue head.

Bosses are usually humans that give small speeches before morphing into various mythical beasts, though most of them are just variations on chimeras and dragons. The Super Famicom manual fills in the backstories for these foes, presenting them as royalty from various civilizations around the globe, including China’s Yin Dynasty, the Visigoth Empire, and the South American Chavin.Compared to Black Tiger (and other arcade/RPG hybrids), Magic Sword does away with the experience leveling and currency system, replacing it with something more straightforward. Most of the items you pick up are keys, of three different varieties, which are used to open locked prison cells. Most of the time when you open one of these, you’ll be rewarded with a bonus item, plus one of eight different ally characters you can recruit. If you take them along with you, they’ll shadow your movements and provide an extra firepower from behind. They have their own separate life meter and disappear once it’s depleted, plus unlike the hero, they have a strength level. If you find a blue heart or recruit the same class of ally, then you’ll raise them one level, though you’ll find stronger ones the higher you climb the tower anyway, so it’s nothing you need to worry about too much.

ArcadeAnd Magic Sword is fantastic at that, because slicing bad guys is exceedingly satisfying in this game. The speed is fast – your character walks briskly, mostly regular enemies go down with a single slice, and even stronger foes only take a few hits to dispose of. With a total of 51 floors, it might seem like it might drag on, but each level ypically takes less than a minute to play through (and sometimes much less) so progress is expedient, and a typical playthrough is probably around 40 minutes.At the end of the game, after beating Drokmar, you can either choose to embrace the power of the Black Orb, or destroy it.

Word Run Cheat & Jumbline Cheat. Word Run Android app is a awesome word game which you have to try and make as many words as possible from the letters that are given to you at the beginning of each game. Our word run cheat is designed to help you figure out how many words you can make with the letters. Jumbline 2 cheat answers games. Jumbline 2 hack hints guides reviews promo codes easter eggs and more for android application. Jumbline 2 cheats tips and tricks added by pro players, testers and other users like you. Ask a question or add answers, watch video tutorials & submit own opinion about this game/app. Our Jumbline 2 cheat tool will unscramble all letters and do all the work for you. All you have to do is choose a word length, which is optional, and click search. Example Jumbline 2 Words. Does a particular Jumbline 2+ Level seem impossible to beat? Not to worry - We'll provide the best tips, tricks, and cheats to beat any Level of this game. Enjoy our hints, walkthroughs and guides to come out on top any Jumbline 2+ Level. Jumbline 2+ is an iPhone and Android Game, developed by Brainium Studios LLC. Today, it has gone through.

Obviously, anyone familiar with these kind of moral choices know that you’re supposed to destroy it to get the good ending – this has been a part of the RPG consciousness since even the original Dragon Quest – though the fact that there are even two endings to begin with is a nice touch.The game looks and sounds great, with colorful, detailed graphics, and a wide variety of background tiles – they do repeat since there are so many stages, but they’re spaced apart far enough that it’s not all that noticeable. The fact that each new sword also has a different graphic is a nice touch. And the music, by Capcom main stay Manami Matsumae, is appropriately dramatic, often approaching a style similar to the Castlevania games. Themes are repeated often but the best tune is the one used most prominently.There are few real flaws with the game, so much as just strange decisions, or perhaps mismatched expectations.

It’s weird that there are a total of nine character classes, but you can only control the main fighter dude, with the rest just basically being power-ups. For as speedy as the game is, 51 stages is kind of long, and by the time you’ve made it about two-thirds of the way through the game, you’ve probably seen most of what it has to offer. (To combat this, as long as the appropriate dip switch is set on the board, you can start the game at certain checkpoints on higher floors, and the game is even nice enough to start you off with the appropriate armament and companion.) While some stages have some platforming elements, or obstacles to dodge (guillotines, swinging balls, etc.), most stages do just involve careening forward and beating up on things, so there’s not much variety, despite how fun it all feels. So in that aspect, gamers expecting something a little more like a run-and-jump a la Black Tiger may find it disappointing.

SNESMagic Sword was ported to the SNES in 1992, two years after its arcade release. With less than a third of the available ROM space, many graphics had to be downgraded – the sprites aren’t as detailed nor as well animated, and the backgrounds lose much of their richness. Some enemies have been removed, two player mode is gone, and while the core gameplay is faithful, there is also substantial slowdown, a regular problem with many early SNES games. Due to the drastically different sound hardware, the music loses some of that CPS-1 FM synth crunchiness, but the conversion still ends up sounding pretty good. The arcade game also included a few hidden routes that let you warp ahead a few stages, which have been removed here (though you can still pick your starting floor). It is a bit easier due to the lesser amount of enemies you’ll have to face, though simultaneously it’s not as satisfying with less things to cut through. Even though it is a notable downgrade, as far as home conversions, it’s still pretty alright.The game also saw release on the Capcom Classics Collection Remixed pack for the PSP, and Capcom Classics Collection Vol.

2 for the PS2 and Xbox. These are straight emulations, though it’s missing the option that lets you pick your starting level.It was also bundled along with Final Fight for the Final Fight: Double Impact release on the PlayStation 3 and Xbox 360. This is a more fully featured emulation, including plenty of graphical options to mimic an arcade monitor and online play, as well as an optional newly arranged soundtrack. It goes for an orchestral feel, which is pretty decent on its own but doesn’t really fit the action all that well and clashes with the old school arcade sound effects. Unfortunately, for the PS3 version, you need to be online and logged into the PSN to play the game at all, even single player, which is a problem if you don’t have your system hooked up to the internet.

This release is included in the Capcom Digital Collection physical release for the Xbox 360 – neither the digital nor the retail release on this platform has the same online restrictions.Although Magic Sword never received a sequel, the 1991 beat-em-up King of Dragons is basically a successor to this title, as it maintains some of the RPG elements, though recasts the core gameplay to be closer to Final Fight. That game in turn was the predecessor to the two later Dungeons and Dragons beat-em-ups from Capcom. The title is also referenced as one of Sylphie’s attacks in the PS2 SRPG Namco X Capcom, along with other Capcom arcade games. SFC ManualThe main artwork for Magic Sword, illustrated by famed Capcom artist Akiman, portrays all of the heroic character classes in the game. The Amazon, in the lower left corner, wears a bikini top, and there appears to be a small bit of nipple spilling out from the side. It’s hard to tell if that was the intention, or if it’s just a bit of shading that looks wrong. Zombiunicorn. Still, it raised enough eyebrows that flyers printed in other territories covered up her bust with a sticker advertising the CPS-1 board, and it was removed outright for the Super Famicom box cover.Links:– includes translations of several aspects, including the bosses’ backstories– Fan site with sprite rips Screenshot Comparisons.