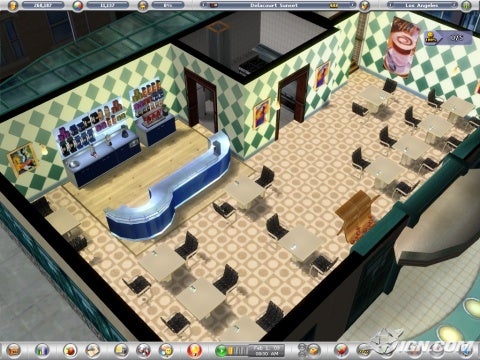 Restaurant Empire 2System RequirementsWindows 98, 2000, ME, XP, Vista1GHz CPU256MB of RAM2GB HDD SpaceDX9 3D graphics with 128MB video RAMAs you probably have guessed from the title, this is a restaurant simulation game. Your job is to create successful restaurants by designing the interior, exterior, menu and food choices and prices.

As a recent culinary graduate, you are given the keys to your retiring uncle's restaurant. The competition is pretty tough with a monopoly food chain that is responsible for closing down many restaurants with their cheap pricing and cheating at the chef competitions. With a little help from the mafia and other investors, Armand can take them down.

You'll be opening up many types of restaurants with different cuisines and themes. Along the way you'll meet your love interest and future wife, Delia.The sequel takes place after the honeymoon where Delia wants to open up a relaxing coffee shop with prices that are triple those of Starbucks. The defaults prices are $11 for a bagel, $8 donuts and $20 for a chicken Caesar salad.

With some strategy and price lowering you can help Delia become a restaurateur like her famous hubby. Armand's chef skills are reset back to beginner level and you'll have to re-learn all the recipes from the original game. You'll have to manage his restaurants and career along with Delia's. Armand will have a TV show and apprentices under his training. All this popularity inflates his ego and time away from his home brings friction in his marriage. I was disappointed to see an option in this game to cheat on your wife.

In the end he does regret his actions and reconciles, but I don't think this was needed in a game focused on managing restaurants.With the story out of the way, let's discuss the game play. When opening a restaurant, there many things to consider, but customer happiness should be your top priority. When buying furniture you'll see ratings on how decorative or comfortable it is. The cheaper the furniture, the more uncomfortable it will be. Your restaurant's star rating will depend on many factors including price, food, service, comfort and decoration. Your staff has to be experienced and courteous or you will get complaints about them; too many complaints will drop your restaurant's star rating.

To remedy this, you can invest money in training or just hire more expensive/experienced staff upfront.The food you serve will have a star rating on it and as you get suppliers, you can upgrade your ingredients for better tasting food. Putting two star recipes in a four star restaurant menu will lower your restaurant rating and may even cause customers to leave without eating! When you start a new scenario make sure you have enough cash on hand to buy new recipes, and tips on improving recipes. If you do not have enough cash on hand you can borrow money from the bank. Keep in mind that your kitchen will have to have the necessary appliances to make the food as well.

You can invest money in learning new recipes or you can buy recipes from customers.Each scenario has goals that need to be met. If you can't pass them, there is an option to play with easier goals. Some of the goals will be to have a certain star rating, satisfaction rating, minimum revenue or profit met. Winning cooking competitions is required to pass some scenarios too. There is a message center to alert you if there are numerous complaints, lack of seating or if a customer wants to speak with a chef. Make sure you read these as they can help you complete your mission.Cooking competitions can be either solo or team events.

There can be one to five rounds with pre-defined themes or limited to preparing a certain recipe. As your chef prepares recipes at the restaurants they will be better at preparing that dish.

Your cooking score will be determined by the chef's skill with that recipe, the quality of the recipe and of the ingredients used. To boost the score even more you can play mini-games during the competition. Some of the mini games remind me of the Brain Age style games for the DS. Some of the games have you clicking on scattered letters, numbers or ingredients in the right sequence or by stopping a moving line as close to the center as possible or click a button when the moving ball lines up on the bulls-eye. If you win the competition your chef's rank will go up and they will take home some cash and a new recipe.With Armand's TV show there's a puzzle style mini game where you have to swap tiles to match three ingredients in a row. The game itself is fun but I had difficulty running it on my desktop machine and my husband's desktop experienced the same slow animation issue.

I was not able to find support or a solution for this problem and I ultimately had to play this section on my laptop and transfer my save files back and forth. Other issues I have encountered were random desktop crashes and entering text in the sandbox mode produced many duplicate characters.Graphically speaking this game is outdated by a few years. Judging by what I have seen on the internet the graphics are improved since the original was released. The customers in the restaurant have different clothes and hair styles but as your restaurants get packed, you'll start to see people looking alike.

The pictures of the prepared meals look yummy at times but then there are some gross looking recipes. For example the picture for lavender tea shows a cup of fluorescent purple tea.I wouldn't drink that.When it comes to the audio, the story sequences are all text conversations. Voice acting would have added so much more to the already well developed characters. The original scenarios have Armand talking in the beginning and it was weird after playing through and beating the game in silence to hear him talking at the end; it was like 'Whoah! The sound effects are good, with the restaurant noises of dishes being picked up and background (jibberish) conversations.

An occasional ambient audio track is played adding a nice touch.I've already touched on the appropriateness issue of Armand having the option of cheating on his wife. It was nice to see their marriage restored and his wife forgives him either way.

Other than that complaint, there are some female statues that can use a little more clothes on them. The original scenarios has some mafia financial assistance which doesn't promote good values.Overall this game is quite a value since it combines both games. They are fairly similar, though one cool addition to the sequel is the option to have live entertainment in your restaurants. Hopefully you won't experience slowness on the TV show puzzles as they make the game unplayable. There is some replay value in sandbox (free play) mode but I find the goal oriented scenarios much more fun. Although this is a fun game I have trouble recommending it because of the immoral content.

The original game I highly recommend as long as you don't mind even more outdated graphics.

Krosmaster arena dofus. Developed with Flash and playable on Windows, Mac and Linux systems, the game has met great success over the years in and out of France and reached several countries and languages, continuing to receive regular updates and new content 10 years later despite the existence of, which could be seen as a competitor. Acting as a pillar in terms of revenue, the game has allowed Ankama to expand into much more than a video game studio and become a publishing company involved in comics, manga, tabletop and card games, animation and more.The premise of the game is that the six Primordial have been stolen by various monsters and villains, and adventurers from all horizons (among which the players) are on the hunt.

Sponsored links
GamesMojo is not an official representative or the developer of this game. Copyrighted materials belong to their respective owners. Warning: Users can download the game from the links of Official Website and legal sources offered in the following articles.
Sponsored links

Nhl 2k 2014 video game. This section collects a base of Restaurant Empire II cheats and console commands, hacks and other secrets for Windows PC that we managed to get.

Unfortunately, the cheat codes for this game aren't ready yet. This game is on the list and they will be added in the nearest future. If you know any other cheats for this or other games that we don't have, but that can help other players to pass the level, then write to us in comments and we will add your lifehacks to this section.