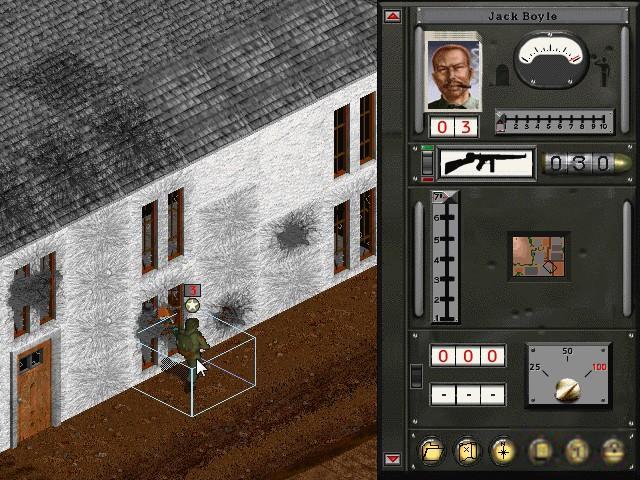 TENSHUN!!!! All right, listen up you pencil-necked, no-load, rock-for-brains army puke. Slayaway camp butcher's cut trophy guide. I want you and your seven worthless men to get ready for a most perilous, hang-your-butt-out-to-dry suicide mission. If you succeed, you and your team will be heroes; fail, and you and your team are fertilizer.

Find helpful customer reviews and review ratings for Soldiers at War - PC at Amazon.com. Read honest and unbiased product reviews from our users.

Welcome to Soldiers at War. This is a turn-based squad-level WWII combat game. Lead your squad of eight men through eighteen linked scenarios that will test your commando skills to the fullest. Try your hand at D-day, Anzio, or take out a V-2 rocket site. Fight it out with real opponents using four-player multiplay via network or the Internet. Create the bloodiest battles you can think of with a custom mission editor in the game. It's all here for those of us who loved the movie The Dirty Dozen.

You use a combination of the keyboard and mouse for all controls in the game. However, when picking soldiers and their equipment or game options, you strictly use the mouse.

While in the game, you use a 3D box to follow the contours of the terrain, clicking with your mouse will move your soldier to that area. You also use the 3D box to target your weapons, throw grenades, or spot incoming artillery.

The keyboard is simple to memorize; you use the number keys at the top of the keyboard for all terrain views (1-7), and you use A and Z keys to raise the level of the terrain. You use the numeric keypad to change which way your soldier is facing during gameplay. The space bar is used to bring up a menu that lets you look at each soldier's statistics, his health, fatigue, what equipment he is carrying. It also allows you to quit and save games from this section.

It took me almost two weeks to really start to understand the views and layering of the terrain. I was constantly using the numbers on my keyboard to expose or take away levels of terrain. When trying to climb stairs in buildings or shoot at an enemy at a higher elevation, I was always using the A or Z key to adjust the elevation view. I found this to be very confusing and downright frustrating the first couple of weeks I played this game. The longer I stuck with it, though, the more fun the game got. The graphics really grabbed me and I found myself sitting very quietly when my soldiers were crawling to their objective. When a major gun battle was going, I found myself getting tense and sweaty waiting to see if any of my guys were gonna take a bullet. I felt myself cringe when a grenade exploded too close and my hands shook after a fierce battle. YES, I GOT SUCKED RIGHT INTO IT.

Wow, wow, and wow. I can't believe the rockin' graphics. Each soldier in the game has over forty awesome actions. You can have him crawl, run, walk, kneel, throw grenades, kick in doors, fire a bazooka, climb into tanks, and whoop some butt in hand-to-hand combat or knife fighting.

The terrain in the game is amazing because SSI has used what is called a 'layering' effect for the game map. Each map has seven layers to it, peeling off a layer will reveal what is under a building for instance. Layering is also used when steep mountains are part of the terrain, so you can have as much of the graphics on the screen as you want. You have lush trees, beautiful brick farm houses, rolling sand dunes, snowy covered peaks, rushing streams, and killer sand bag emplacements. The graphics are a little hard to figure out at first, but once you learn how to change layers and levels, you will really get into the game.

I found the individual soldiers to be the best part of the graphics in the entire game. You can actually see that your medic has a Red Cross band on his arm. All the soldiers' movements are very fluid: when they crawl, you see their elbows and knees bend, when they throw grenades, you see their arms cock back. This attention to detail makes the killing fun and the pillaging even better.

Men are screaming, the machine gun is roaring, shells are exploding all around. God, I love the sound of death in the morning. The audio really adds to the game. At the beginning of each mission, Captain Spencer gives you a little pep talk and shows you what the mission objectives are on the game map. Once inside the game, if you have the weather option turned on, you will hear the rain cascading down, really cool thunder and lightning, and rockin’ windstorms. The weapon sounds are what make it so fun. The machine guns really roar and the bazooka makes a big whoosh sound. I found the sound of a flame-thrower to be quite soothing to the ears. If there are enemy soldiers close by, your squad mates will whisper 'Enemy seen,' or they issue a boisterous 'NO CAN DO SIR!' if they can't or won't do what you've ordered. The best by far, though, is the sound of a hand grenade going off with a thunderous BOOOOOM!!! followed by the sound of men screaming in pain. It makes you really paranoid to stick your head over the wall to see if you killed them all.

One thing I noticed right away with this and other SSI games is that the in-game tutorial is becoming the best way to really get into and understand a new PC game. The instruction book, however, does have all the standard information on installing the game, running DirectX, and how to play online. The section about how to edit your own games is very thorough, showing the exact steps to take in order to build your own scenarios and campaigns. The first part of the instruction manual is a step-by-step mission that follows the in-game tutorial. The next part covers sections on your video settings, game options, and overall settings for the game. The meat and potatoes portion of the book covers all commands for the soldiers in the game, how to outfit your squad, how to fire weapons, how to steal really neat stuff from dead guys, how to toss those grenades that you're dying to use. All in all, I would have to say that it's an average instruction book with no big frills.

After one week of playing this game, I was about ready to file it under 'G' for garbage. After a week and a half, I had an even bigger urge to toss it. Finally, after two weeks, all the pieces fell into place and I started to love this game. Why, you ask? Well, for starters, understanding the layers and levels of the terrain was maddening at first, but the more I played, the better I understood what the layers were about and how they could actually help in the gameplay. I also didn't like the fact that I had to constantly fiddle with the different layers in order to see more of the map. But as I learned more I soon came to understand layering was a necessary evil that was worth dealing with. Soldiers at War reminds me of Close Combat 2 in that they both have the same squad-level tactics and missions. However, that's where the similarities end. In Soldiers at War, you can actually see what your soldiers are doing; they're not little specks that move with jerky motions. When you want a soldier to crawl, you get an up-close view of him crawling, not to mention that all the terrain in the game is in 3D. It's the killer graphics of the soldiers and their fluid movements that make the game fun. I really started to care about my eight-man team of Death Dealers and their welfare. It is really worth your time if you take a couple of weeks to really learn all the functions and characteristics of the game. Once you do that, you won't be able to stand the wait until you get to play again and cause some merry death for the German Army. You also have almost unlimited replay value with the mission editor, Internet play, single scenarios and campaigns. On that note, gentle reader, I simply tell you that killing is a business and business is very, very good in this game.