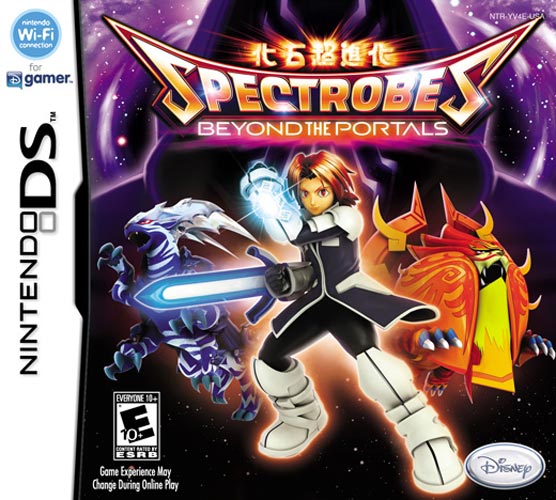 An action/adventure game mixing real-time battles, science fiction and monster collection, Spectrobes: Origins brings the successful series known from its previous DS releases to the Wii for the first time. Packed with an exciting new story that reveals secrets from the franchises past, three-dimensional graphics, unique Wii controls and all new ga meplay features-including co-op gameplay-Spectrobes: Origins challenges players to prevent a galactic threat by utilizing speed, strategy and of course, Spectrobes.

Following two intergalactic outings on Nintendo DS, Spectrobes: Origins arrives exclusively on Wii as you once again bring the fight to the evil Krawl forces menacing the planetary system. With all-new Spectrobes to excavate and evolve, two-player cooperative play and a time-twisting, mind-bending plot, Spectrobes: Origins will draw you into a new dimension of excitement.Fans of the original Spectrobes titles will need no introduction to the heroes, Rallen and Jenna, members of the Nanairo Planetary Patrol who are charged with keeping the galaxy safe. If you're new to the series, it won't take you long to get absorbed in the gripping story and the intuitive gameplay. Spectrobes: Origins does much more than simply move the story of the series forward. Inter-dimensional portals carry the heroes to a world where past and present merge and the truth behind a whole host of intriguing mysteries from the first two titles is revealed through flashback sequences.Making progress in the game depends upon excavating fossils from which mysterious creatures called Spectrobes can be awakened. These creatures can then be controlled in order to hunt for other Spectrobes, do battle with enemies or get them to evolve into more powerful forms.

The excavation process is more sophisticated than ever as you retrieve the fossils in full 3D, with the unique controls made possible by the Wii Remote allowing you to pick up tools and point to precisely where you want to use them. You’ll choose between a range of tools, including bombs, drills and hammers, and you'll need to keep your wits about you during excavation as there will be perils to contend with such as steam, poison, oil and magma.As you collect the Spectrobes and build up their power, you’ll need to think strategically in order to put together an unbeatable team to grapple with the nefarious Krawl. Proper preparation is the key to success and Spectrobes: Origins lets you construct your own customised virtual rooms in which to train your forces. This content may be purchased by users who have registered a Nintendo Account and accepted the respective legal terms. To be able to purchase content for Wii U or Nintendo 3DS family systems, a Nintendo Network ID is also required and your funds usable through the Nintendo Account must be merged with the funds tied to your Nintendo Network ID.

Though she has a small army of cyborgs and mutants to command, she has no actual physical power to wield, and as such thwarting more than one of her schemes has to be done with the AI's screams and threats in the background.In System Shock, the player ejects a garden grove pod from Citadel Station. The grove contains one of SHODAN's processing components and part of her grand biological experiment. The pod crash lands on the planet V and she survives by for the next 42 years. System shock shodan. The player character in System Shock 2 is a soldier cybernetically modified by SHODAN to serve as her. After both are brought aboard the starship Von Braun and SHODAN is reactivated, she discovers the experiment is no longer at her command and begins to enlist humans to aid her in destroying her creations.

If the funds have not yet been merged, you will have the option to do so during the purchase process. To start the purchasing process, it is necessary to sign in with the Nintendo Account and the Nintendo Network ID.

This system must be updated to the latest system software and connected to the internet with automatic downloads enabled, and it must have enough storage to complete the download. Depending on the system/console/hardware model you own and your use of it, an additional storage device may be required to download software from Nintendo eShop. Please visit our for more information.Please make sure you have enough storage to complete the download.

A Super Mineral is a mineral that can be found in Spectrobes: Origins. The mineral is shaped like a crown. The mineral is shaped like a crown. When it is eaten by a Spectrobe, all of its stats are boosted by 10 (eg: ATK, DEF and HP +10). Glunkus's Editor for Origins, or GEO, is a save editor for Origins (Windows only, sorry Linux and Mac users) that I've been working on. Its main goal is to edit the data for spectrobes, so things like changing your spectrobe's level, stats, and even species.

After you have completed the purchase, the content will be downloaded to the applicable system linked to your Nintendo Account, or your Nintendo Network ID in the case of Wii U or Nintendo 3DS family systems. This system must be updated to the latest system software and connected to the internet with automatic downloads enabled, and it must have enough storage to complete the download. Depending on the system/console/hardware model you own and your use of it, an additional storage device may be required to download software from Nintendo eShop. Please visit our for more information.Please make sure you have enough storage to complete the download.